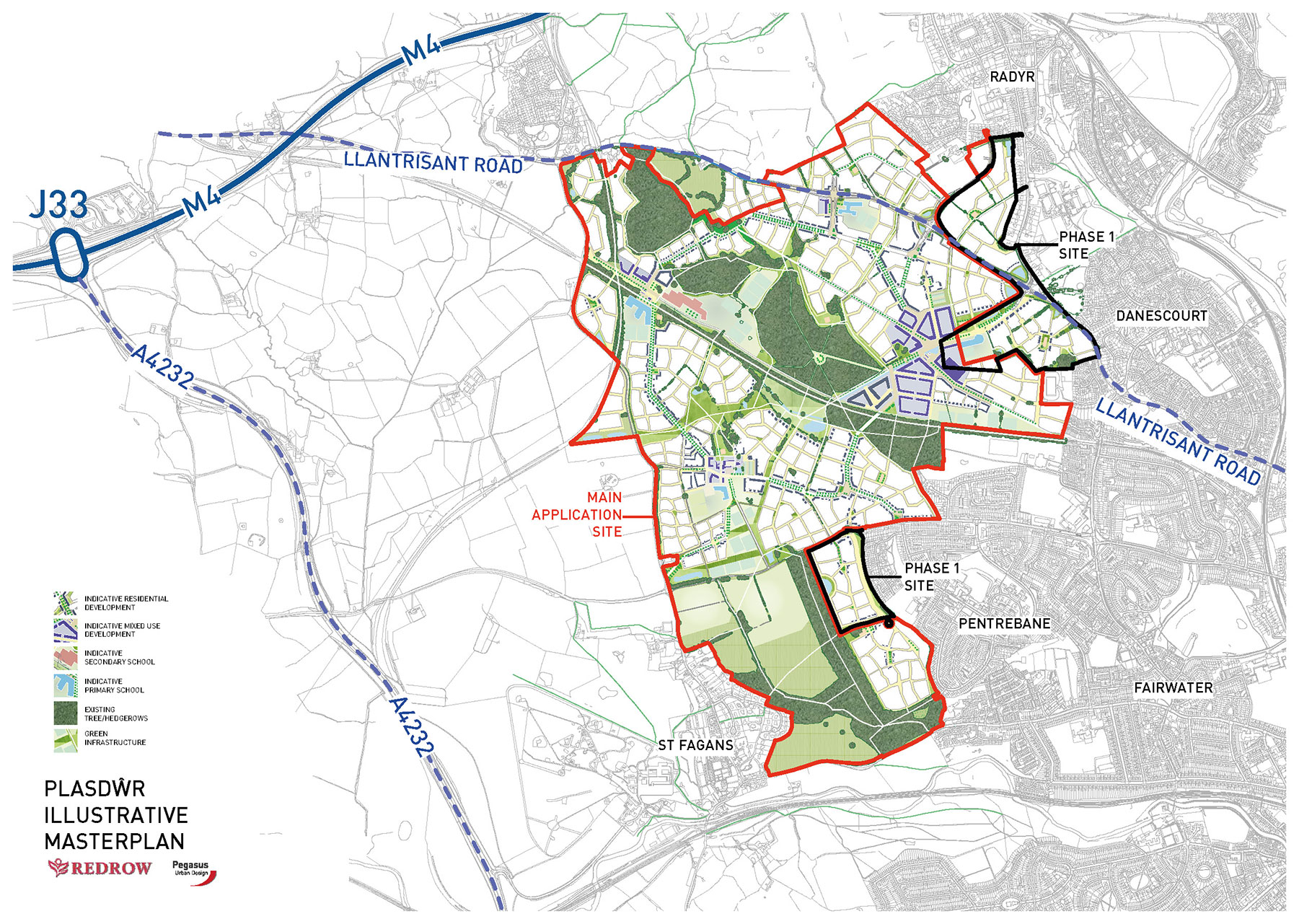 Developers have submitted detailed plans for a 21st century garden city in north west Cardiff which they say will deliver the homes and community the capital needs, help fuel economic growth and be a ‘model for sustainable living’.

The plan for Plasdŵr takes its inspiration from the enduring garden city movement, founded on the principles of “fresh air, sunlight, breathing room and playing room”.

According to developer, Wales-based Redrow Homes, it incorporates the ‘successful elements of the garden city movement and existing areas of Cardiff such as Pontcanna and Rhiwbina. Characterised by plentiful green spaces with four distinct centres, Plasdŵr will be set within 900 acres of open countryside bordering the existing communities of Fairwater, St Fagans, Danescourt and Radyr.

The proposed development underpins the local authority’s Local Development Plan (LDP) which identifies residential development in north west Cardiff as key to the city’s economic growth. The LDP has been approved by the Council and is currently being considered by an independent planning inspector on behalf of Welsh Government, with a decision expected in October 2015. If both the LDP and the Plasdŵr plans are approved, work is likely to begin at the beginning of 2016 and will last up to 20 years.

In September, in partnership with landowners, Plymouth Estate, Redrow submitted two development proposals to Cardiff Council for planning permission – one to develop 630 homes and a primary school to the north and south of Llantrisant Road and the second proposing 290 homes at Pentrebane. While they say these developments could stand alone in helping to meet identified housing need, they will form the first phase of the Plasdŵr master plan.

With one main and three smaller centres, each with its own high street and public square at the heart, Plasdŵr has been planned to maximise walkability and cyclability and promote public transport via a carefully planned hierarchy of roads, paths and cycleways.

Sustainability is a key feature, with homes of all different tenures and in a wide range of styles with an emphasis on contextual design, combining traditional materials with contemporary features and constructed using the latest environmentally responsible design features.

“Plasdŵr will combine a historical countryside setting with the convenience of being on the outskirts of a capital city,” said Wayne Rees, project director for Plasdŵr at Redrow.

“Cardiff desperately needs a mix of new housing on a large scale, but creating a 21st century garden city on the outskirts of our capital represents a much bigger opportunity than just providing homes. Our vision for Plasdŵr is to take the principles of the garden city movement – sustainable community living, plenty of beautiful open spaces, self-contained yet well-connected – and create a place where current and future generations will be proud to live, work and play.”

The developers are continuing to seek feedback on the plans from all stakeholders, including the neighbouring local communities.

“Plasdŵr will offer opportunities and facilities for all its neighbouring communities, and we are continuing to ensure local communities are familiar with the plans,” said Mr Rees.

“At the same time as submitting the planning application, we launched a website where all plans are available to view and download, and where people can directly feed back to us.”

Stuart Rowlands, Managing Director of Redrow Homes’ south Wales division, added, “Cardiff is growing, and its reputation as a great place to live is growing too: almost every month brings a new lifestyle survey topped by London’s closest capital city.

“As a company with its headquarters in Wales, Redrow is particularly proud to be working with a local landowner to bring forward such a significant development.

Plasdŵr would be an addition which is not only worthy of but also able to both serve and enhance the city’s burgeoning popularity.”